Famously known as the Big Temple, It is one of the best places of worship in India, this granite temple was built in 1010 by the emperor Rja Rja Chola I. The temple has intricate architecture and a fascinating history. A really huge statue of Nandi weighing 20,000kg is adorned at the entrance of the temple. The temple covers a really huge area which takes a lot of time of the tourists to see all the ancient carvings on the gigantic walls.

Dome of the Rock, Jerusalem Located on the Temple Mount in Jerusalem, this temple is one of the city’s most recognized landmark. It as built in the 7th century but is still famous for its architecture. Its octagonal design and colorful mosaics are really impressive for the people visiting this place.

5 Spellbinding Temples Outside India To Visit! The historians believe that this temple was built between the 6th and 10th centuries but the legend tells a different story of it being built more than 2500 years ago. This Buddhist pagoda was constructed by two brothers who met Lord Gautam Buddha. It is a really peaceful place perfect to sit and calm yourself.

Foreign Countries That Are Just a Road Trip Away from India The magnificence of this Catholic and Christian temple has very notable Italian architecture. One of the largest temples in the world, St Peter’s was completed building in 1626. It has the tallest dome in the world which is more than 130m high. The dome is fully decorated with marble and really detailed sculptures. Built in 1986, Lotus Temple proves the fact that religious architecture does not necessarily have to be ancient in order to be beautiful. It is made of 27 petal structure that shape the skyline and that is how it got its name too. It is a really famous place in the city visited by a huge number of people, surpassing the Taj Mahal in annual visitors. It is located on a steep cliff 3800m above Paro Valley and therefor is not easy to reach. But the journey to reach the temple through forest and past waterfalls make it a really interesting visit. The view is awesome once you reach the place. It was built in 1692. The aura of the temple is really relaxing with the fragrance of the incense sticks calming your mind. 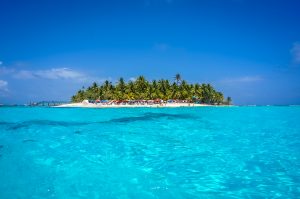 San Andrés – A Story About How I Got Hitched To The Caribbean Paradise
November 23, 2017