Lotus Temple isn’t too far from Kailash Colony. On my fourth day in Delhi, Visiting the temple seemed like a good idea, and I was quite inquisitive to find out what the buzz around this place was all about. The temple was a first tourist spot that didn’t demand any entry fee. All other places demanded a small fee of around INR 20-50, while the foreigners were required to pay INR 500, something I found quite amusing. I was half expecting an excessive number of coconut and flower vendors outside the gates, and some form of idol inside, but nothing of the sort was present here, which piqued my curiosity even further.

Turns out, the Lotus Temple is based on The Baha’i faith of Worship. The Baha’i Faith of Worship believes in the direct dialogue between you and what you render as the Almighty. Unlike the priests or the pandits, there is no virtual or physical mediator in between.

The Lotus Temple is a beautiful structure that invites people from all walks and religions to pray and meditate together. Instead of elegant idols to represent the million gods, the temple houses rows of wooden benches to set on, and silently meditate. What surprised me was the beautiful coexistence of man and the local fauna as I observed mynahs flying across the corners of the temple unafraid, and unchained. This form of worship has undoubtedly influenced my thoughts the most, and I pray this faith permeates throughout the world.

Most Beautiful Places of Worship

Surrounding the temple were luscious green lawns, all watered with recycled water, according the notice boards. People stood in organized queues for once, a rare sight in India. I had another glass of the delicious banta that was available outside the premises. We had really planned to go back home after this, but sitting in the wrong metro landed us outside Khan Market Station. Kaavash had heard about the famous Khan Chacha Kaathi rolls so we made up to eat there, but as luck would have it, the place was shut thanks to Eid! Like Cyber Hub, though, Khan Market too has loads of eateries, so finding food wasn’t a problem. Apart from general stores, there wasn’t much else to do around here, so we traveled back to Greater Kailash and called it a day.

On my fifth day in Delhi, I visited the Ambiance Mall in Gurgaon. This mall is a jaw-droppingly huge one! And even though the world-famous H&M store was opening up its stores in Bombay next month in August, I was nevertheless attracted to to the store. Another friend joined us, and we all played bowling at bluO PVR. I don’t remember laughing so hard at my own self – I was pathetic at the sport even for a first timer!

We visited Dwarka in the evening. Largely a residential area, this area has schools on every corner. I loved the organized block system here – they called it sectors, and a few prominent ones had metro stations all to themselves. After having a quick lunch at Subway, where we had a deep conversation about the lifestyle in Delhi and Mumbai. I expressed how Delhi was full of wide open spaces and broader roads in general compared to Bombay. But then, Mumbai is the densest city in the country.

10 Places in India for Filmy Travelers

Dwarka has these electric vehicles running about the district, called as ‘Saarthi’. But again, the drivers charge you whatever they like if you seem to be a tourist. Always remember to settle the price before riding on these vehicles, or you’ll be tricked like we were – I had to pay INR 90 just for a five minute ride, which is costlier than an AC Uber taxi!

The Radisson Blu Hotel in Dwarka contains the most high end fine dining restaurants and cafes. The photographer within us is sure to be satisfied with these interiors. There’s a beautiful fountain in the lobby that really steals the show. Watch out for the many beautiful chandeliers that adorn the ceilings here. I even got my pedicure done for the very first time at Looks Salon in Dwarka itself. 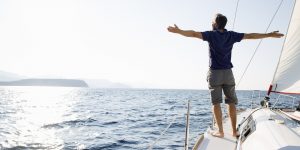 A Walk In Paradise! Magical Tree Tunnels Across The World
October 12, 2017