Music concerts, paintball games, human bowling, comedy shows, skiing, rave parties, European culture – all served on a platter of snow. That’s what European snow festivals are meant for. if you thought the winters are gone,  we are here to prove you wrong. Here is an exclusive list of winter festival fun of the upcoming season so that you never miss out on snow, even in spring! Horizon’s new home, Andorra, is situated high in the Pyrenees Mountains between France and Spain. This time, the base of this winter festival is the striking ski resort of Arinsal, easily accessible from both Barcelona and Toulouse Airports. Along with 100+ DJs to attract the audience, there are Mountain-top main stage, intimate bars, late night clubs, forest parties, warehouses, secret hostels, crazy avalanche tunnels and lots more. Adventure snow parks here, cater to all types of skiers ranging from novice to championship trainees.

Dates: to be announced Located at Mayrhofen in Austria, Altitude Comedy Festival has a unique combination of stand-up comedy and alpine sports that paves the way  for days of nonstop entertainment. Mayrhofen is a town in the Zillertal in the Austrian state of Tyrol. It is approximately an hour’s journey from the Tyrolean capital city of Innsbruck.  Skiing and snowboarding followed by side-splitting laughter back at the resort – you ought not to miss this one if you have got the humour bone! One of the most popular ski resorts in Austria, Mayrhofen strikes once again with Snowbombing. There’s an Arctic Disco, where you groove inside a real igloo to the likes of Fatboy Slim, Skrillex, Rudimental and Carl Cox while sipping mulled wine under the stars. During the day, non skiers won’t run out of options either!-  there are plenty of other activities such as Paragliding, Snow Yoga, Snow Limos and Alpine coffee shops to keep you on your toes. Since Les Deux Alpes has the largest skiable glacier in Europe, Rise Festival 2017 taking place at the French ski resort L2A, is a must watch out for ski lovers to go skiing through breathtaking slopes.  Festival-goers are welcomed to make the most of the resort’s famous slopes, with 100 marked runs and over 200 km of piste-skiing. Post that, the festival takes over the resort’s après-ski bars, clubs and streets for partying into the night. You can also go trekking with your pals to enjoy jaw-dropping views of the highest mountain in the alp, Mont Blanc. “Snowboxx should be the only winter festival you book this year” – Metro.

Avoriaz – a French mountain resort in the heart of the Portes du Soleil, is where Snowboxx 2017 is going to take place. It is located in the territory of the commune of Morzine. With a hefty 400 square mile ski area spanning across France and Switzerland, once a year, Avoriaz is turned into a winter wonderland for Snowboxx to take place. The best part is that it’s all ski in and ski out. Since all accommodations are right on the piste, you have no choice but to ski wherever you go! Don’t worry about partying and DJ nights. You’ll have more than you can digest.

A huge number of snow festivals take place every year in Europe. Some of them, like the Snow bike festival of Gstaad (Switzerland) and the snow and ice festival of Bruges (Belgium) are already over by this time of the year. Others are selling out fast. So, book your tickets ASAP if you really want to go. Places Where You Can Live For More Than 3 Months On A Tourist Visa
March 9, 2017 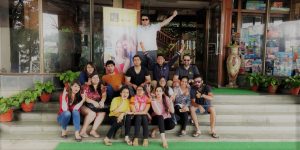