The history of India has always fascinated me- her abundant wealth had allured many travellers across the world. It feels sad how the repeated conquests and plunders over thousands of years had turned India into a third world nation. ‘Hampi’ was one such powerful kingdom of the Medieval India located on the banks of the river ‘Tungabadra‘, it was thriving as the richest kingdom and also happened to be one of the biggest trading centers of the world.

When the glory and grandeur of Hampi was utmost, the streets were swarmed with foreign traders from Europe, China and Persia. The sheer architectural grandeur, diamond & ruby street markets and hundreds of temples – stand as a testimony to the Vijayanagara glory. So, after planning for a month, I got to explore ‘Hampi’,  which has gone to rack and ruins after its downfall.

After an overnight bus journey from Bangalore to Hospet- we (a group of six) set our foot in the erstwhile Vijayanagara empire. As we already booked our stay, we took an auto to Hampi which was 12 kms from Hospet. On our way, we noticed that the entire place was strewn with boulders, gleaming the beautiful morning rays as the sun rose up. Set next to the Tungabadra river, Virupaksha was built in dedication to lord shiva. It dates back to 7th century and is the only temple still worshiped amidst the hundreds of temple ruins in Hampi that has been able to survive despite many attacks. It has one of the tallest ‘Gopuras’ in South India rising amongst the crumbling ruins of the area.

It was scorching hot even in the month of December. As soon as we entered the temple premises, I was awestruck by the stone carvings inside the temple which depicted the episodes of Shiva’s life. As I touched a stone to take a closer look at the carving, it felt so cold even on such a hot day. I had this deep, profound feeling that this centuries old spiritual site is harnessing positive energy that seems to be reflecting from all corners of the temple!

After Lord Shiva’s darshan(visit), we walked around the temple, where we came across this pond ‘Manamatha‘ which was built with stones and painted in white & red. The water into the pond is collected from the river Tungabadra through an internal pipeline, which flows few meters away from there.

We walked toward the river Tungabadra which was filled with huge boulders and were carved by the river that was cutting through them for several hundreds of years. The ‘Om’ written on them with white chalk looked prominent and vibrant even from a distance adding more spirituality to the place.

Before leaving the temple, we took blessings from the temple elephant Lakshmi. I found a lot of foreigners in that particular section, as it might have been astonishing for them to see an elephant among the people, which is unusual for them. Also, the place if filled with lot of monkeys, leaping around but, thankfully not being too mischievous.

From Virupaksha temple, we proceeded to other ruins. On our way, we saw a huge gate like structure made of rock. Our guide told us that they were ancient toll gates -Hampi had fortified entry points, this shows how meticulously Vijayanagara rulers set their security standards to monitor the movements in and out of the capital.

Also, we saw a long stretch of vandalized markets which must have been once flocked with people. I wondered if those were the diamond and ruby markets!

We stopped at the gigantic 7 meter tall monolith statue of Narasimha (fierce lion-faced man), seated in a cross-legged position with protruding eyes and a discernible mane, it was carved amazingly. Although ,it was mutilated by the Mughals during the attacks,  it still holds its charm.

By noon, we reached theLotus Mahal- one of the few extant structures in Hampi. The ambience of the place is so welcoming, no wonder this was a resting place for the royals. It is said that Lotus mahal is a recreational home to King Krishnadevaraya and  his queen. Needless to say, about the craftsmanship of the Vijayanagara’s sculptors who turned every rock into a wonderful piece of art.


After lunch at a local place, we decided to visit Hazara Rama temple, which was a private temple for the king and his family. The sculpted friezes on the temple walls depicts the Ramayana, each carving there utters a euphonious story of Lord Rama. The temple premises exude an aura of fascination, we stayed there till dusk appreciating the splendid art work.


Don’t Miss These Places In Karnataka On Your Next Visit!

We left early in the morning to see the Royal Enclosure. During its heyday the palace was magnificent with large stone-made basements and sandalwood carved pillars. It is  heartbreaking to see what remains of the erstwhile palace are just the stone basements. The entire area was burnt to ground by the Mughals. The King’s audience hall, Mahanavami dibba are the two major structures of the royal enclosure where public festivals and important meetings used to take place.

Another notable constructions in the royal enclosure were – underground secret chamber for meetings, an aqueduct with stone pipes connecting the entire closure and a stepped tank.

The most happening place in the world during its time is now just stones and rubbles now. Urgh! That was depressing 😞

From the Royal enclosure, our autowala took us to show more carvings that were lurking amongst the rocky mountains along the river. Clambering upon the slippery rocks in the sweltering heat was a real challenge! A wrong step would have broken a bone.

For the next one hour we hopped on stones just to discover hundreds of carvings, carvings everwhere. It made me wonder if sculpturing had a booming market, like the IT industry today.

By the time we arrived at the Vitthala temple there were long queues of kids, which looked like a school excursion. We somehow managed to get in and found a place to rest for a while.

It felt so serene, I then started to notice the carvings which I missed when I entered because of the crowd. My jaw dropped as I took a closer look of the fine carvings, which were done with a minimal tools on hard granite stones. Marvellous it was !

I was eager to play the musical pillars which produces the ‘Saptasvara'(seven musical notes), but it was under renovation.

After spending more than an hour at Vitthala temple, our next stop was at ‘Malyavanta Raghunatha temple. This sacred land dating back to the Treta Yuga, which was once known as Kishkinda, Ram in his journey of exile, meets Hanuman who was born here. After the abduction of Sita, it is here that they planned to get back Sita from Lanka. The peculiarity about the temple is, it has a huge boulder below its ‘Gopura’ it is said that lord Rama meditated here.

Book a flight to Bangalore.

I heard a lot about the sunset views from Anjanadhri hill and is something that shouldn’t be missed! After a strenuous hike over 550 steps, we finally reached the top of the hill and discovered stunning panaromic views of Hampi. We occupied a boulder to capture the best views, and to our reilef, a cool breeze greeted us wiping out the sweat, whether its the spiritual chantings from the shrine or the bright orange sun setting in the horizon – no adjective can describe the serenity I experienced there.

During the bus journey from Hampi, I knew that the week is going to be a tough one for me, after the heart-wrenching sight of a kingdom as greater than Rome to be in ruins.

I wish I can stay as calm as the boulders that contemplated the rise and fall of Hampi. 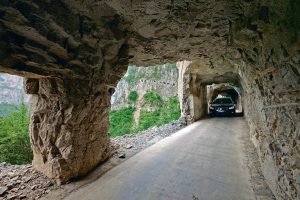