When two guys went on an exciting trek to Kheerganga, they came back as more confident individuals and ardent nature lovers. The noisy city life and the stressful professional life hardly give one any time to relax in nature’s lap. It is in such situations of crisis that one should take a few days off and follow the path of nature. Let us get a glimpse of Aditya Awasthi’s Kheerganga trek with his buddy Prince Katara. It was on my trip to Kasol in the December 2015 that I came to know about Kheerganga trek and what made me curious to try it out was the challenges it poses. I was told that it is one of the most challenging and refreshing treks. I had been trying to convince my friends to accompany me and finally on 7th of June my travel buddy Prince Katara agreed. The excitement was on another level and I could already feel the adrenaline rush. On 10th June we took a bus to Bhuntar from ISBT kashmiri Gate, Delhi. Bhuntar is a town in Kullu district in the state of Himachal Pradesh. Bhuntar Airport also known as Kullu airport, serves the town along with Kullu and Manali, Kasol and Manikaran. It took us 12-14 hours to reach Bhunter and from there we took a bus to Kasol, Manikaran. Manikaran is just an hour away from Bhunter but it took us almost 2 hours to reach there as the roads were rough and bumpy. The excitement was palpable in the air and we savored delicious food at local dhabbas on our way. The second day seemed refreshing and we could already behold exhilarating views on our way. We reached  Manikaran at 6pm and the idea of trekking at night did not feel comfortable to any of us. Hence we decided to stay there.

While there are good accommodation options available in Manikaran with all the facilities and amenities, we decided to stay in our tent to feel closer to nature. After a long journey, bathing in hot water springs felt extremely relaxing and we also visited a nearby gurudwara. Lying wide awake in our tent we could feel the serenity of the surroundings and the silent night was interrupted by the buzzing of insects and the rustle of leaves. Never in my life did silence felt so melodious the way it did that night in the beautiful Manikaran. I woke up to a totally different view in the morning, the entire landscape looked stunning and welcoming. While the beauty of the place remained hidden under the thick blanket of night and all we could hear was the cascading river and the buzzing of insects, morning unwrapped an entirely breathtaking scenery for us.

In the morning we left for Barshaini which is the starting point of the Kheerganga Trek. You can see the locals ascending and descending the hills with heavy load on their back. I occasionally spoke to them and they were extremely friendly, there is something about the people living in hills which makes them so warm and welcoming. The trek was indeed mesmerizing and there are so many pristine waterfalls and eternal viewpoints on the way that you do not feel tired at all. The first few kilometers of the trek are very easy and our trail went through lush farms, small hills and villages along the Parvati River. It is only after we crossed the first dhabba that the trek began to seem challenging but our enthusiasm helped us go on.

We did not hire any guide as we wanted to explore the area on our own. We stopped at Rudranaga village for a short break, the noddles had typical pahari taste and felt even more delicious as we savored it beside a beautiful waterfall. The cool breeze felt relaxing and we were told that the path becomes steeper after Rudranaga. The last part of the trek was very demanding and grueling but we continued despite being extremely tired and exhausted.  We covered the 12-13km trek in 4-5 hours and our eyes lit up as we reached Kheerganga. Kheerganga is more beautiful than anyone can describe, it is a place soaked in spirituality, beauty and serenity. We saw a small pool on the highest point and we were told that the water from the hot springs is believed to be holy with healing properties. We spent  a good 1-2 hours in the pool and the warm water treated our fatigue. The way back took less time as compared to the trek for obvious reasons. It took us 3.30 hours to reach back to Barshaini as we stopped and chilled at many places.

We are back in Delhi but the memories of the adventurous trek, beautiful sights , nature’s nurture, fun in the camp and amazing foods are still alive and fresh. 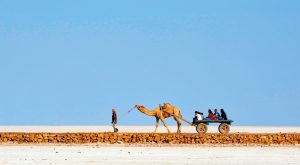 This Time Enjoy Your Trip With Your Furry Buddy At These Amazing Pet Friendly Hotels In India
March 30, 2018