While Makke di roti is known to all, there is much more that Punjab offers when it comes to mouthwatering, spicy food. Punjabi food surely has a distinguished taste blended with the exotic spices, desi ghee and makhan(butter). Here are some of the most famous dishes from Punjab which will make you fall in love with the state. When talking about Punjabi food, one has to start with Makke ki Roti which is served with sarso ka saag. Often relished with jaggery and fresh, white butter on top this dish delights the hearts of all age groups  alike.

Butter chicken, also commonly known as Murg Makhani is the love of every Punjabi and no celebration can ever be completed without this dish. Butter Chicken is often served with naan or rumali roti and is also loved with rice. This aromatic and tasty dish is generally milder compared to chicken vindaloo or chicken madras.

Book a hotel in Chandigarh.

When spicy chole accompany bhature, one cannot resist this combination because it is too delicious. Chole-Bhature has become a very common and popular dish in north-India and is easily available on almost all the food outlets. This delicious duo is filling and scrumptious. A defining delicacy of Punjabi food, loaded with cream and butter, lassi is a must have when in Punjab. It is yogurt-based drink from the Indian Subcontinent and originates from Punjab. While lassi is originally sweet in taste or salty, there are a number of flavours available these days including strawberry, mango and rose. Traditional lassi is a savoury drink and is salty in taste flavoured with roasted cumin.

Food With A View: Best Rooftop Restaurants in Dubai

Dal Makhni is the queen of Punjabi dals and is made with Whole Black Lentils and Red Kidney Beans with Makhan (White Butter) and full fat cream adding to the taste and thickness of it as the name suggests. Usually served with rice, dal makhani is thick, creamy and spicy in taste. 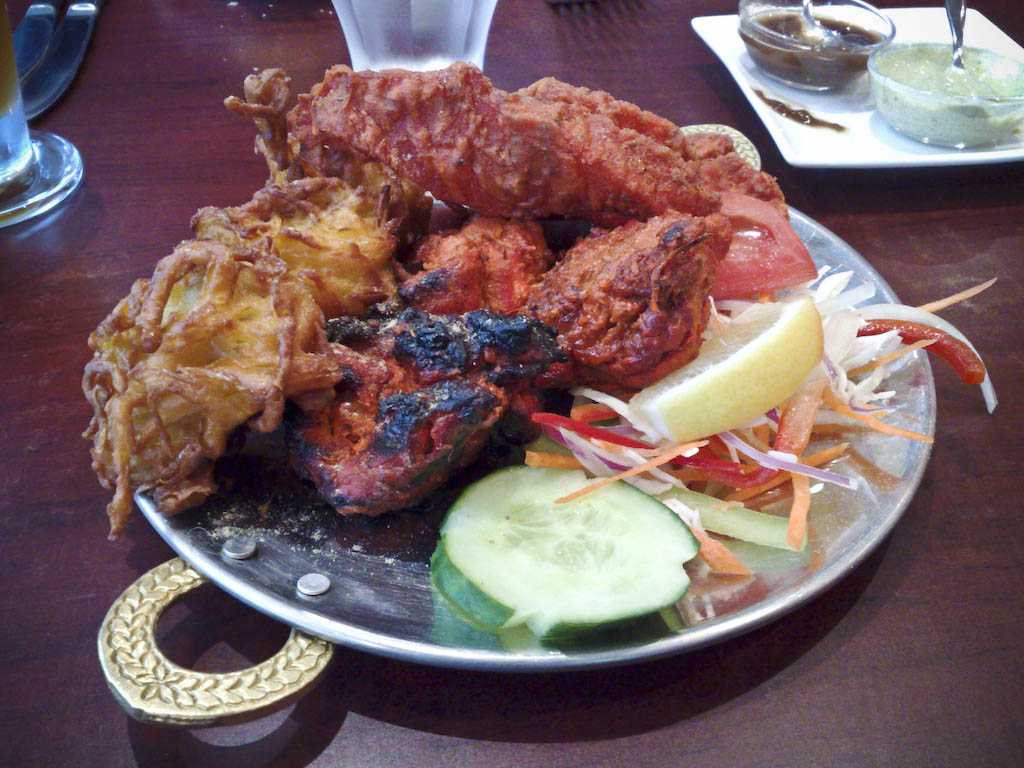 Amritsari fish is named after the city in which it originated and this dish is a popular street food and restaurant style starter. This delicious fried fish is prepared with lot of spices and it is a great appetizer or side dish to complement the main course. Squeeze some lemon juice before you eat and do not forget to have some onion along.

Best Seafood Restaurants In Delhi To Tickle Your Taste Buds

While Rajma is a cuisine of Kashmir, it has always been very dear to all the households in Punjab. Made with red kidney beans Rajma is cooked in a delicious gravy and served with hot steaming rice. Strangely, Rajma and dal makhani always taste better the next day so if you happen to make extra, do not regret because you are going to repeat this mistake purposefully from next time.

These Indian Restaurants In Singapore Won’t Let You Fall Homesick!

Panner and butter chicken are two of the most favourite dishes of Punjab and be it marriage, engagement, birthday party or family get-together, these two dishes are served with love and pride much like lassi.  Paneer tikka is made from chunks of paneer marinated in spices and grilled in a tandoor and it is also considered as vegetarian’s chicken tikka. King of Punjabi food, Parantha is a part of everyday breakfast in Punjabi households and the variety of stuffed paranthas will leave you craving for more. Onion parantha, gobhi (couliflower) parantha, aalu parantha, methi parantha, mix vegetable parantha, cheese parantha, baby corn parantha… and the list goes on. With lots of butter melting on the top and the aroma of pickle teasing your taste buds I bet you will forget all your diet resolutions and devour them. Punjabi kadhi is spicy and thick unlike Gujrati or Rajasthani counterparts. Besan pakoda are added to it to make it more delicious and filling and it is often served with steamy plain rice. It is also called punjabi pakoda kadhi as it contains besan/vegetable balls. And, I have saved the sweetest for the end because desserts make you smile no matter what. Pinni is a Punjabi sweet dish and it is eaten mostly in winters. Pinni is made from desi ghee, wheat flour, jaggery, raisins and almonds. There are many varieties of pinni available like urad dal pinni or coconut pinni. Delicious, nutritious pinni is just perfect to accompany your Punjabi meal.

Which is your favourite dish from Punjab? Share with us in the comment box below and next time when you are in Punjab do not forget to get some pinni for your friends and family.

Let’s move on to another state’s delicacies, Most Delectable Dishes From Rajasthan The World’s Most Eco-Friendly Cities
October 8, 2016