On our way to the peak, was the blissfully dreamy Harishchandreshwar temple, that was carved out of mountain stone. Ancient structures like these often trigger my mind to think of those times our ancestors roamed the earth. Maybe, in those lost times, this mountain had been a flourishing village, this old temple being the only existing testimony.

Attached to the temple were water tanks, and it is believed that the pristine river Mangal Ganga originates from these water tanks, or cisterns. We also came across a trident, or shivaling in more indigenous parlance, impaled into the soft earth, towering high above us. Whether the trident was a recent addition or it had been present right from the beginning, remains a mystery. After my brief episode of being lost in the faded wilderness, I was finally directed towards the caves which would become our abode for the day. I completed my trek in around 5 hours, and the sun shone damply in the forenoon at 11.30 am when I located my group after calling out ’80 degrees’, repeatedly to find the cave they were resting in.

In view of unforeseen circumstance, there was an increased number of mountaineers present that day, due to which, we had to share our cave with another group of hikers, even though we had booked the cave well before time. This bunch seemed to be the highbrow kind, for as soon as they set up base, tents went up inside the already cozy depths of our cave.

This naturally invited good amounts of judgement from our side, something they were immune to. The pelting rains on our way up here had left us all wet and shivering, and it was such a relief to be able to change into a dry pair of clothes in a small indent that was present in the cave itself. Mind you, this little space was pitch black, and I thanked the heavens I had chanced upon carrying a pocket torch for this occasion.

Lunch was very authentic, locally inspired Maharashtian food. We all gathered, in small groups, outside what you might want to call the ‘dining cave’. A woman in her midlife operated a very crude, unsophisticated stove – a make-do of three stones arranged in a fashion to support cooking food, and firewood placed below for steady supply of heat. The menu boasted of rice and dal, both inspired by spices of the aboriginal type. 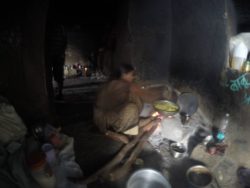 There also was bhakri, a kind of indian bread, whose batter consisted of ground rice, bajri (or pearl millet in more sophisticated terminology), and jowar. Featuring with bhakri was chilli chutney, and fried papad. Non vegetarian food in the form of chicken meat was also being generously served, but I was dubious of the quality of meat, and my young friend Jatan was a pure vegetarian, so the idea was dropped altogether.

Being authentically and truly Indian, we demanded another cup of hot chai, the perfect refreshment on a cold, wet afternoon before gifting our tired bodies with a few hours worth of tranquil sleep. And only when I touched my back to the floor below, did I realize how direly I needed this episode of rest. 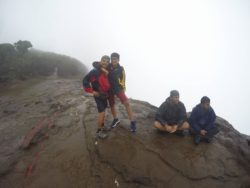 The evening was beautifully spent at the Konkan Kada, or the Konkan Cliff. After half an hour worth of not so rigorous trekking, over gentle slopes, we reached our point of interest. It was a very magnificent spot to revel in. Konkan Kada is the most dangerous of cliffs harbored by the extensive western ghats, and also one of the most breathtaking. Our luck was marred by the ever present mist that left our surroundings dull and whitish grey.

On a warm sunny day, however, the extent of the plains below could be seen from this dangerous cliff. There was a ‘savadhan’ sign etched in red against the earthen rock that sprawled across the place, which no one really heeded to, because we still went ahead to sit nearer the edge than would be termed as safe.

Our return back to the homely, cozy caves was cheerfully received with heaps of maggi, which Jatan had two to three helpings of, and hot, freshly made kanda bhajji, a fitting food for the weeping skies.The evening also saw a little bit of bonding among the trek participants, and more than one showcased their talent in the form of singing old time favorite hindi songs, which proved to be a time machine for me. Buried memories do come flashing back at the first sounds of familiar tones.

Hampi: A Kingdom Lost In Time

As the evening dragged into twilight, we were visited by the ranks of Venus, that burned bright before fading into the background, pledging the stage to other, more intricate constellations that alternately shined in a charade of display.

But the hazy clouds impatiently took hold of the open skies once again, threatening to pour apocalyptic rains upon us earthlings, but never quite delivered upon these promises And we were very helpful to the rain gods for holding back their waters.

Dinner at night followed a similar pattern as the daytime meal, exquisitely tasty nonetheless. There broke out an unfortunate argument between the sharing groups of the cave over who would have dinner first, but we soon deemed it unworthy of our temper and let them have their way. Sleep was served to us at around 9.30-10 pm, which would knock us cold at least till the the next morning. I slept a very dreamless sleep that night.

Our morning started early again, at around 6.30 am. Nature calls had to be attended to a little far away from base. Business of the nature was handled beside a purring and twisting mountain brook that would join its comrades to form a slighlty wider stream a few hundred meters north. Breakfast was again, an assorted dish from the Maharashtrian cuisine, kande pohe and a fresh cup of tea.

Journey downward is often more difficult than the upward climb, more so in case of wet and slippery earth and smoother pebbles. We had to tread carefully, for the lose earth would cause a domino effect if even one person took the fall. Mid way, two of the organizers decided to move ahead so they could reach early and make arrangements for the jeep back to ST stands.

With adept and experienced feet, cutting down time and moving faster than the herd was quite an easy feat. Jatan and I decided to follow them, but we could’t keep up with their pace, and there came a time when we were just stranded in between, the main group too far behind and the organizers nowhere in sight. With educated guesses based on litter on the ground and how used a particular road was, we successfully did manage to reach the foothills.

This trek had been a blast. With just the right amount of challenge and leisure, and an altogether different experience hiking in the mystical fog, I’d recommend any nature lover to embark on this beautiful trip.

Also read I Dreamt I Explored I Got A Story: Ladakh! 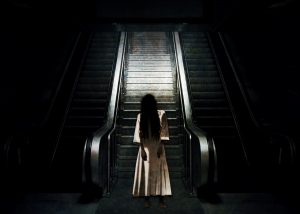 Signs That Say You Are Travel Addicted
August 27, 2016