As the sun began traversing the skies, so our hike began with great gusto through the red mud.The trek to Harishchandragad begins!

If you haven’t read about my journey the day before, read Trek to Harishchandragad I

There came a fork in our way, and to our right lay the vast expanses of green forests. The huts of Khireshwar village had long thinned out by now, and rustic nature engulfed us as we embarked on the climb that was a muddy trail into the jungle. Let us forget of all our worries and focus on the delectable, yet formidable weather here. Above our heads was a thick, damp sky, slightly eased by the freely flowing breeze. It felt like we were being dissolved in a sense of boundless, but somehow matter-of-fact, solid mist. The fog was like a dense, wet blanket cracking through the air. There was no way we could see ahead of a few hundred meters. However, when, miraculously this mist would relent for a bit, ranges that imitated old-world mountainsides met with our eyes, pristine and pure.

As we gained height, the fog was accompanied by a rosy, romantic chill, where lovers might want to reignite their ancient charm, lost in this passionate ubiquitous haze. The lovely, dreamy, enormous expanse of countryside lay ahead of us, and beside us. It would narrow down with the progress of time. Soon, we were surrounded by an environment that featured naked boughs, silhouetted against the distasteful grey of the sky, and below them, on the muddy slush, an array of sepulchral chrome leaves had arranged themselves in a strange fashion. An occasional cry from a lone parakeet, or a lost Rufus Babbler would be heard, but we never really saw any of these birds; they were taking shelter from the fierce weather. The overcast skies gave way to very heavy bouts of rain, that pelted against tender human skin the way hail pelts against solid ground.

It was amid these harsh water droplets that I realized how lucky I was to not have worn simple cotton or woolen clothes, because they become soaked and heavy quite easily in the unrelenting rains, exposing the skin to the harsh forces of nature. Sportswear, or dry fit clothes, in contrast, dry out quite comfortably and do not assume too much weight even when wet.

A Himalayan trek to the Bhrigu lake

A solid four hours were spent battling the rains, and hiking through the now stern slopes. It got so dangerous at a point, that railings had to be installed to support the amateur mountaineer, lest they slip and break their limbs. Through narrow trails along the winding slopes of these ghats, we traveled, one at a time,  and one foot at a time, shrouded in cloaks of determination and concentration. Throughout our expedition, a twosome of adorable, heartwarming dogs kept us cheerful company with their adolescently playful nature, in which they frolicked and barked, their tails maintaining a steady, friendly series of wags that would invite even the stoniest of hearts to shower them with love. Like honest messiahs, these dogs would show us the way along dubious forks when even the trek organizers would get confused in the intense fog.

As we neared our destination, we saw makeshift huts which offered buttermilk, lime juice, tea and coffee to relax our parched throats. Their strategic positions seemed to be only a result of years of experience of catering to tired hikers.

My ageing body was tempted to rest in one of these cozy huts to rest my legs, and rest I did, even though my group continued along its path. My young friend Jatan, very much alive with the fresh blood running through his body, went on along with them. It was quite fascinating to observe the finer details of the construction. The hut was made out of dried cow dung bricks, and there were no chairs to sit upon. Instead, mounds were created from the very same cow dung. One side of the hut lacked walls; instead, closely placed bamboo structures were clumped together to provide some sort of support and protection. I set out again, into the wilderness and the thick fog, to find my way to the camping area. As misfortune would have it, however, I lost my way through a couple of forks. The organizers had told me it was a straight road, and very easy to find, but circumstance proved otherwise. It was only after a state of panic and lost hope, that I luckily found a few locals walking in my direction. They very helpfully guided me along the path to the camping caves.

Overall, The trek to Harishchandragad was an awesome experience overall.

The next part in this series is all about how our time was spent in the caves, the majestic Konkan Kada and the night to come. Stay tuned! Must Have Bollywood Songs For Your Travel Playlist
December 23, 2015

A Travelers Checklist of Things To Carry On Trip
March 27, 2016 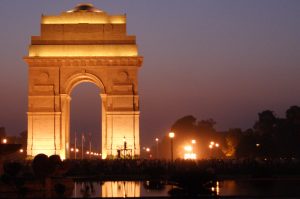